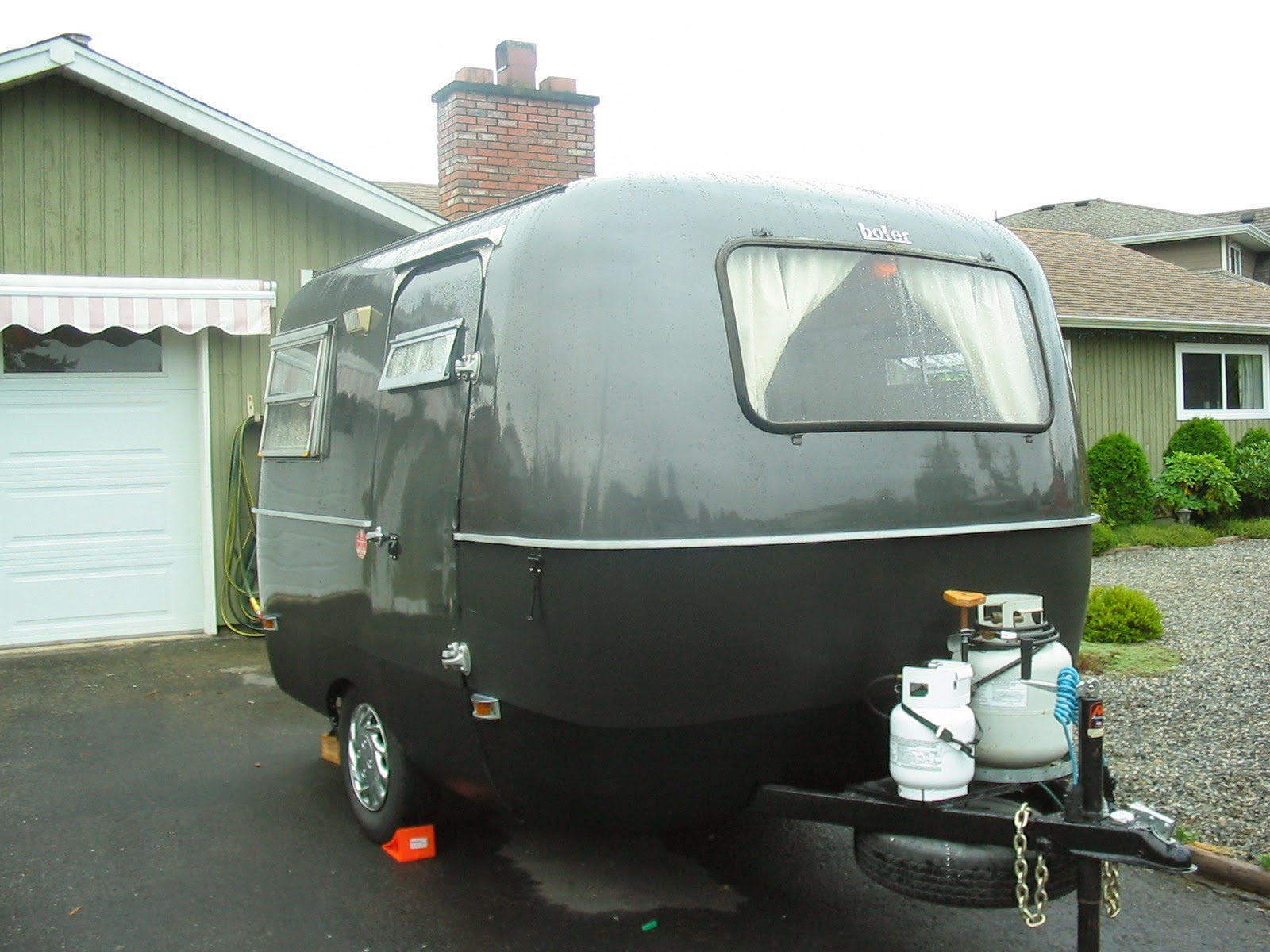 We have missed our camping or Glamping as my daughter calls it., since we sold our last RV a  small  hybrid trailer with tent push-out at the front a couple of years ago. I can no longer obtain medical travel insurance to venture outside of Canada . Hence the notion of making a trans Canada camping trip next year.

With that in mind we rented a Boler to see if it would meet our needs. We were well satisfied and purchased on our way home this a 1974 Boler 13oo . This has had significant upgrades :
Body off and a new frame and suspension automotive grade paint job and most of the interior cabinets replaced. However, it has also been abused it had severe gravel rash on the front face and an improperly fitted Door. and the lighting wiring is haywire 🙂 etc etc etc.

Given a couple of weeks and a few $$$ all this can be remedied. Well ! it tool over a month 🙂

The most obvious issue with our Boler and most 40 yr models is an ill fitting door. There is lots on info on the web for remedies. The easiest of these , moving or spacing the hinges improved the fit but it was still kicking out at the bottom front edge. Clearly a far more drastic step was needed. I cut through the inside panel in multiple places from the bottom up to the lower hinge area this enabled me to easily flex the door to attain a profile that came close to my cardboard templates. To do this I used a combination of pushing and pulling with spreader bar and tie-down straps. Then relaid fibre glass over the mess which in turn will be covered to match the planned cork flooring.

Next a pair of scissor jacks from a Honda Civic were obtained from a wrecker and installed under the rear frame on bolts tapped into the main rails.

The spare tie carrier was remover from the rear bumper and mounted under the the “A” frame tied into the propane carrier plate.

The Furnace and  Cook top had been removed but the Icebox needed cleaning and minor attention so out it came. Then I could see that there was plenty of room to add more insulation around it so cut panels from a sheet of 2 1/2″ thick R12 foam sheet and created a box into which the original icebox would slide. I also added an HD Alum foil skin to the original insulation.

It is all very well increasing the insulation to keep heat out but there is the other side of the equation too.
Water is one of the planets special materials. to convert 1 lb of ice to water requires adding 942 btu that is a lot of energy now if you can lower the freeing point of water it takes even more heat to melt. Add 1/4 cup of rock salt to a Quart of water in a suitable container and some food colouring and freeze it you now have super ice for your ice box 🙂

I have now removed all the wooden cabinet doors and fixtures for clean-up sanding and refinishing.

Laid carpet across the front dinette section to replace the ribbed rubber.

The front & rear tables were made from MDF which is very heavy so I am replacing the them with lighter plywood all in birch to match the cabinets.

Having replaced or rerouted most of the wiring and installed a new vehicle to trailer connection.

I repainted the interior before re-installing the furnishings and cabinets.

Ready for our first shake down trip . The 3 days up island was a great success and generated a “to-do list” of course 🙂

Must do included :
Further adjustment of the door fit
Turn bed to N-S for a more convenient exit to the pee bucket
Buy and install a propane stove top
Provision of a Toilet – lhttp://tomndi.blogspot.ca/2014/09/dry-camping-with-cleanwaste-pett.html

Additionally I had booked the trailer in for a wheel bearing service and found a sign shop willing to cover up the battle scarred front with mock carbonfibre vinyl  I followed that with masking a line at the side markers lights below which I applied “Rock Guard” from Cdn Tire. This pretty much completed the exterior appearance upgrade.

The Suburban two burner stove from Amazon.ca arrived and I installed it this week having removed all other gas lines do a soapy water test on all joints I await a service tech coming to do a certification pressure drop test on the system .

The door has been refitted . The picture below show a change of method :

Turning the bed to N-S

This was made easier by the fact that I had made a large Drawer to fit under the rear table when lowered to the bed position . By pulling open the drawer it supports the N-S bed extension and of course is retracted during the day.

I think all the Boler family’s window mechanisms fail but then I am sure that Ray Olecko never thought they would be still as popular and functioning 40 + yrs on. I took mine apart it was easy and cleaned and polished the em but the crank mechanism is cheap potmetal crap and the worm drives were damaged from over tighten them. I tried Vitage Trailer but they are all out of RH 🙂 the ones used on Bolers . I think I have found a substitute at Ashvillemobilehomes.com I just hope I can make them work.

A Tote Box for the rear bumper 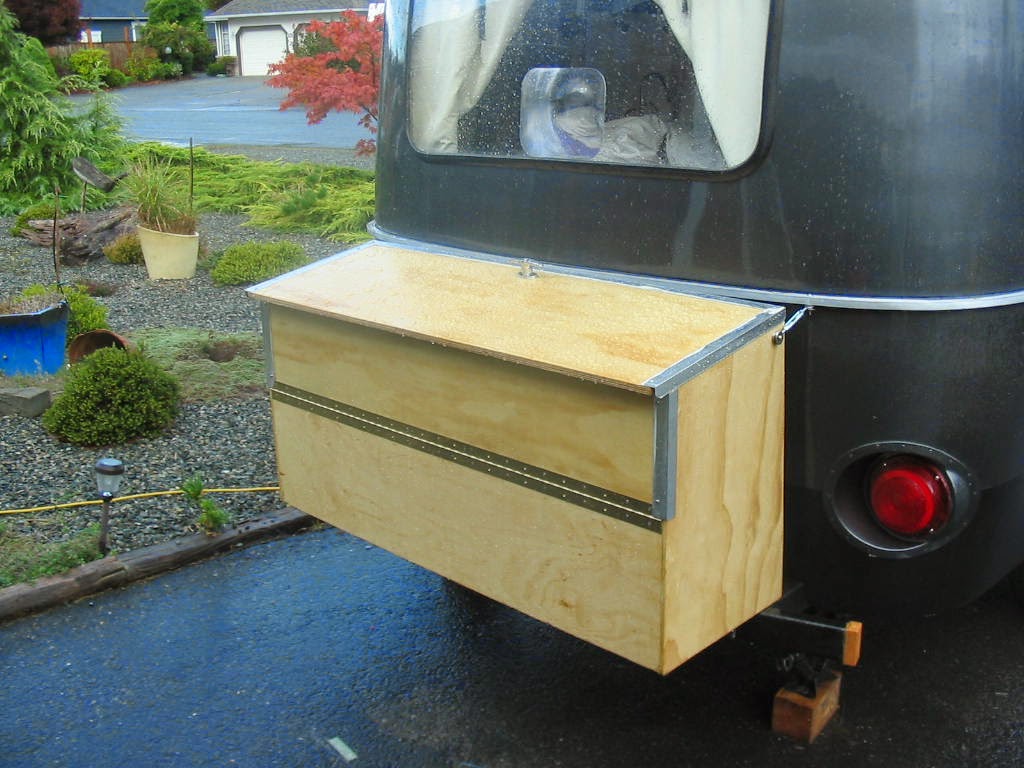 Swapping the Icebox for a Fridge

The improved insulation around the icebox appeared not to have worked to my satisfaction. so after a few trips I decided to look for a fridge to fit in its place.
Koolatron, a Canadian company which makes a 1.7 cuft fridge in two variants . My first choice was for a model # CR 48 Thermoelectric 12/120v 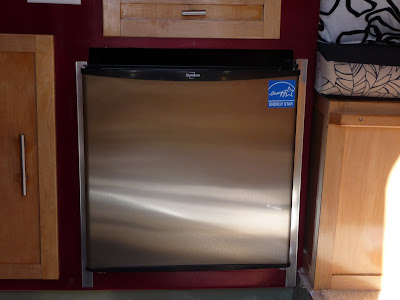 http://koolatrononline.stores.yahoo.net/ac-dc-refrigerator.html
which does not have a compressor . However when I tried to purchase one  They had mysteriously disappeared ? . Instead I settled for the compressor version
BC 46 – 120v from Sears.
http://www.sears.ca/product/koolatron-kool-compact-fridge/646-000982777-KBC-70
It was necessary to widen the cabinet opening an inch to slide the fridge in place and there was a 1 1/2″gap at the top to allow the necessary adequate air circulation. 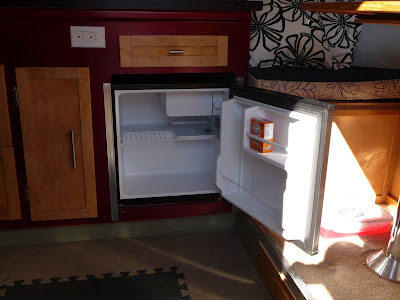 We sold the Boler in Fall of 2015 to some nice folks from Duncan BC having decided that the Trail lite 17 we previously owned was a better suited to our needs .
We camp mostly in the off season so a heater and a toilet are significant requirements .