Inspired by Garry Roberts ” The Fine Art of Woood Turning” I plan on trying to replicatesome of his projects. This will require a reliable indexing method . Checking around my shop the saw rack provided me with the following useful tooth counts 100; 72; 60; & 48 mounting each in turn at the arse end and a 12″ disc of MDF on Dado arbour I was able using the gullets to align temporary stop pin and drill accurate pitch circles for each set through the MDF disk. !00 onear the perimeter and 48 centre most.

Next I made a better indexing stop set-up which is mounted to the Arse end machine cover per ” Power Tool Woodworking for Everyone” -DeCristoforo.

Next I will be making a tool post mounting system for drilling or machining with such as Demel or 5″ Disc Grinder. This to carry out surface and cut-out mork on Turned products.

My current SS is a 1984 and my 2nd. They have served my small shop well. Being an apprenticed machinist I know that every task requires a machine set-up  it matters little whether you have a large shop full of single purpose machinery or a Shopsmith and a good tablesaw. You still have to set or re-set the machine for the task in hand. Space is a premium for me and I am more than satisfied with what i can achieve with a SS 🙂

However, since the machine has been around for so long the designers were sloth in introducing much needed improvements. One that remained unresolved for a long time was the availability of a hand wheel to elevate or lower the main table and lathe tool rests instead of the quirky handle that always seems to be in the wrong position. Grrrrrrrrrrrr!

Today I made my own handwheel 🙂

On a scrap of 3/4″ plywood with a compass I laid out the 5″ dia on this PCD  & marked twelve equi-spaced points which were drilled out with a 1″ forstner bit.
At the centre I next laid out the 5 lobe centres on a   5/8″ PCD and drilled each to 9/32″ dia. The remaining centre was removed and the aperture filed to fit the machines lobed pinion lock.
Lastly on the bandsaw the original 5″ PCD circle was cut and dressed to finish with a 3/32″ round over bit in the router on all edges. 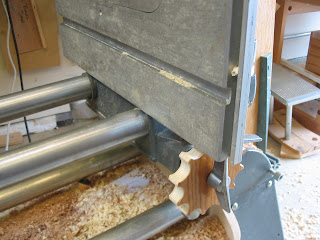 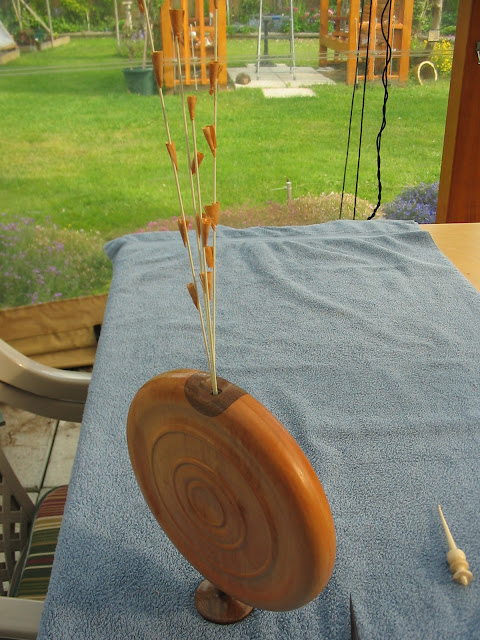 Hamstead House sell end of line books at a significant discount from a monthly catalogue. One that I ordered recently ” The Art of Fine Woodturning” by Garry Roberts inspired me to try to replicate one of his designs as a gift for my daughter in Appleton. This is a fabulous book of designs which I found to be inspiring – ISBN 0-8069-8709-X .

I followed his recommended process for a hollow flask starting with a 2″ thick plank of Red Alder cut to 10″ sq. An 8″ dia circle is centred on both faces and a 2″ dia hole drilled with forstner bit @ top dead centre. The curly shaving being carefully saved. Next a plug in a black walnut was turned to a snug fit in the block and bored through 1″ dia. and finally glued in place. Now I sliced the block to 1″ thick and refaced the sawn faces on the planer and the previously drawn circles used to guide the cut two disks on the bandsaw.

The first disk blank was mounted on a waste block with double sided turning tape and centred with the original compass point. The initial shaping is done with the blank supported with a running centre in the tailstock. Note: the outside face of the disk is shaped first and the outer rim rounded over. Sand finish outer face. The disk is then removed from the waste block , fresh tape applied and reverse mounted  in the same manner and hollowed to about 3/16″ wall thickness.

The process is repeated for the second blank and when completed the first platter is brought back and after a dry fit and careful alignment of the grain glued to the still mounted 2nd platter glued with light pressure applied by the tailstock until set and cured.

Now the joint line is carefully cleaned up using the lightest of cuts and sand out  before cleaning up the centre portion that was under the waste block tape. flip the assembly over and finish the other side to match. Apply your favourite finish.

The surface design was laid out using masking tape and the shallow groove cut with sanding drum and disks. 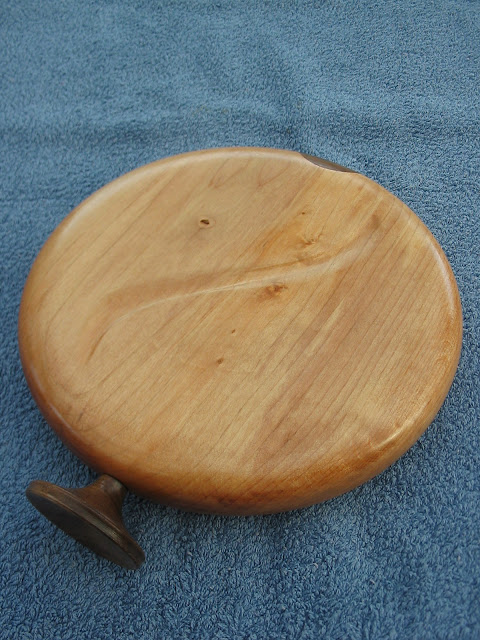 I don’t usually use high lustre finishes but this project seemed to call for one so I applied  multitudes of coats of Tung Oil with  the usual fine sand and buff between each coat.

Unable to find 1/16″ dowel for the twig stems I used  fibreglass rod and since the flower/shaving are fragile I also made a couple of finials styled after watching Cindy Drozer on You-Tube. 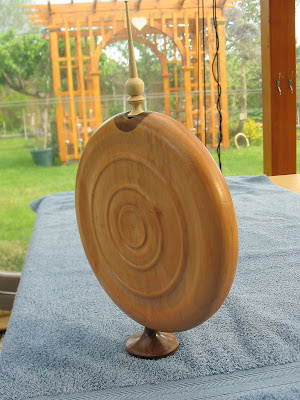 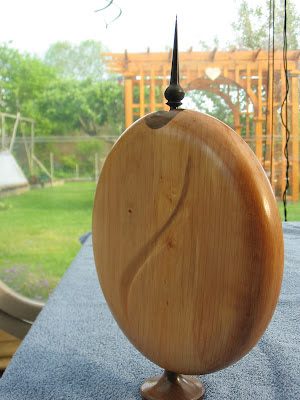 I have long had the notion to try using the Shopsmith as Light Weight Verticle Milling Machine.
I bought a two way cross slide table and a tilting machine vice to mount on the table. For cutting tools I use the 1/2″  router adaptor with a 1/2″ dia HSS end mill mounted.
In setting up this arrangement I came up with the idea of using a 3 ft lenth of 1/2″ dia ground bar stock to align all aspects of the machines axis. “Far simpler that the SS manual recommended method”. Firstly with the machine in the normal position I mount in the bar in the router adaptor and set the tail stock alignment to perfect :). Next I zero the table in level position to perfect paralell with the centred bar stock now check and align the table for squareness to the said bar stock. With table swung to verticle and the barstock fed through the tables centre opening I can zero the table square/ vecticle and set the stops. Now everything is to my satisfaction so I mount the two way cross slide table and set it true square to the main axis also again the 1/2″ bar stock fits snug into the Tee slots to provide solid ref points ( see pix below). Similarly I mount the vice again clamping a square to achieve alignment.

Confused ! study the pix below 🙂

After finding an article by Jim Wilson –http://www.paragoncode.com/shop/duplicator/ I was inspired to build a duplicator for my Shopsmith.

The idea of a simple duplicator came to mind aftter seeing a set of European wooden nativity scene figures that were made entirely from turned shapes. I thought this simple duplicator would be perfect to produce several sets.
With the Shopsmith I am able to mill and cut aluminium so the tool carrier was made from a billet of 1/2′ material 7 1/2″ x 4″ alloy which was mounted to the base made from 4″ x 4″ x 1/4 alloy angle with 3- 1/4″ UNC machine screws. Since I had 5/16″ sq  x  4″ HSS tool stock I used this and cut a slat .300″ deep to locate the tool bar.
The template follower was made by drilling a #10-32 bolt to accept an expired metal ball point.

To try out the set up a compiled the best features several sewing or mending kit designs and made templates for  from 1/8″ thick sheet acrylic. I was quite pleased with the results. However, further refinement is required as I used an offcut of countertop for the table but discovered that it was not true flat causing some tool wobble/chatter so I will remake that part using 2 layers of 3/4″ cabinet grade ply.