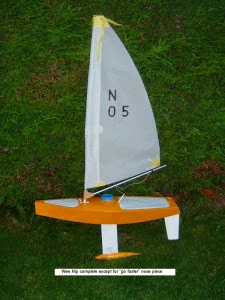 I chose this boat design because it looked to be easy for a novice builder which it was and on the strength of this experience plan to build this winter  my first IOM one meter class boat . The design chosen is again a hard chine and similar in hull construction to Wee Nip.

I have received two sets of plans from Cornwall boats in UK – “Box Kite” another Graham bantock design from 2001 and “Why Not” designed by John  Spencer dated 1999 . Neither of these boats will challenge a contemporary $300 to 5000 Kevlar hull but for that is not what it is all about. I feel that I learn to sail well with a more affordable easy to build boat and have just as much fun as the other guy.

A Wee Nip of history
The original Wee Nip, a una rig (single mainsail) design was conceived to fit into the Strathclyde 70 class, a modellers competition originally conceived and sponsored by Strathclyde University in Scotland to encourage students to consider a career in Naval Architecture & Marine Engineering..
The concept for this class is to make the performance of all the yachts the same. The Wee Nip is a very simple construction and most suitable for beginners to Model Yacht building. With a standard sail set on each boat it produces close and exciting racing for the more experienced skippers and allows skippers new to model yacht racing to learn the necessary skills at a low entry level cost.
The Wee Nip hull designer, Graham Bantock, who has been most helpful, assisted in putting together some formal class rules for publication. The rules and plans were finalised and the current number of Wee Nips either completed or under construction is far more than was ever envisaged.
The hull form is a bit of an “Ugly Duckling” but after a while it looks more like a yacht and seems to grow on you. Once on the water Wee Nips sail away right off the bank with only some minor trimming, and is a very forgiving yacht, easy to sail boat.
A further development was the one size Bermuda Rig. The class is intended to have standard boats to one design with a generous minimum weight with the performance difference between boats should be minimal. All this means that the racing is exciting and close, and skippers will also find it challenging and be able to use their ability to shine in the class.
That said, several variants have emerged. One of Graham Bannock’s concepts with this design is that it would be a basis for people to innovate and experiment around the original. The Abingdon MYC  UK produced and sail a Bermuda Rigged version on essentially the same hull. Whereas Australian and New Zealand sailors modified the hull slightly and adopted swing rigs similar to those found in the RG65 class another Strathclyde Class member.
I am building both the original with Una rig and a second hull capable of carrying three different rigs – The Abingdon Bermuda , The Aussie Swing , and Mc Rig.
The original Una Rigged boat is completed and two outings established that only two of the five mast locations are useful . ie Nos 2 and 3 from the front (Bow). So I suggest to others not to drill the other 3 holes in the deck unless need is determined on the water trials.
This hull was made with .043 Formica or Arborite  = cheap and strong easy to work with. The keel bulb was laminated from scrap sheet lead from a roofing supplier bonded with epoxy rough shaped with sanding disc then dip coated with more epoxy and finally painted after attaching to the .100 thick polished aluminium fin. The rudder was also made from the same material and mounted to a CF post.
The second hull is not yet finished. It is constructed from .040 sheet styrene and will I think to be lighter with wood fabricated Fin & Rudder and is MkII  version as per Abingdon MYC which can use either Bermuda rig or a Swing rig or a Mc Rig similar to :
Links to Photo Albums :Original Wee nip Build – https://plus.google.com/photos/115931605126035494004/albums/6063034567622262401