From my Owslebury blog – http://owsleburyhants.blogspot.ca/ 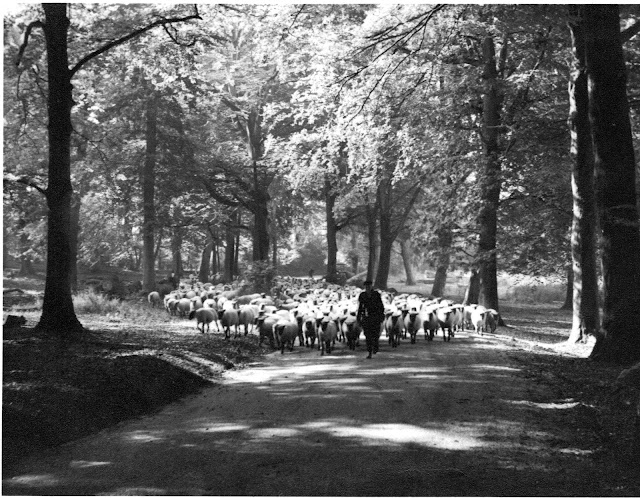 This photograph was given to my Dad by the photographer and it has hung in our house for many years , a glimpse into the pastoral life now gone but not forgotten. 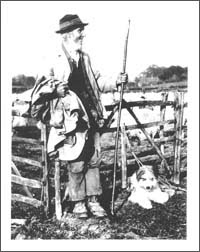 The article that follows is thanks to – The Shepherds Hut Company it provides an insight into the important roll of Sheep and Shepherd on the Hampshire Chalk Down lands , one which is completely lost today.

History of the Shepherd’s Hut
In the nineteenth century, farming customs on the light chalky soils of
southern England were far different to modern day practices.
Labour was cheap and plentiful and sprays and artificial fertilisers were
unheard of. 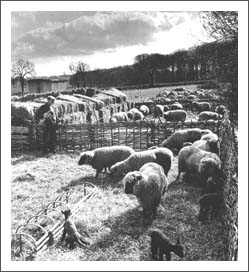 In order to get any kind of production from these thin and often impoverished
soils, fertiliser in the form of farmyard manure had to be applied. However,
the physical problems and cost of hauling vast quantities of manure from
the farmyard to the distant fields were too great.
To overcome these problems, farmers employed animals to do the work for
them – sheep. The era of ‘The Golden Hoof’ had arrived.

History of the Shepherd’s Hut

The sheep that were used to perform the task of fertilising the uplands were
very different from those you see on the hills and downs of southern England
today. Almost every farm with downland or chalky soil would have had a
flock of downland sheep – Hampshire Down, Dorset Down, Oxford Down,
or South Down. 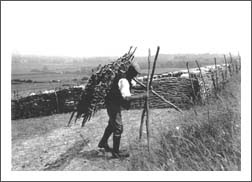 These sheep were not allowed to roam free but were kept tightly enclosed
behind hurdles. Once the forage crop or grassland had been grazed, the
hurdles and flock would be moved on to new pasture, leaving behind manure
that would be ploughed in ready for a crop of wheat, barley or oats.
Without this organic fertiliser, it would not have been possible to grow these crops
in such light soils.
If you owned a downland farm in the 19th century, a well managed flock of sheep
and a hard working shepherd were essential, so much so that your shepherd was
the most important worker on your farm. As most downland villages were set in
valleys and downland fields were the farthest away, the shepherd had to have
somewhere to store his tools and medicines. It was hard, physical work with flocks having to be moved daily and the
shepherd also had to have somewhere to eat, rest and sleep, especially during
the lambing season.
Thus, the Shepherd’s Hut was borne.
The shepherd’s hut was a kitchen, dining room, bedroom, sitting room and
storeroom all rolled into one. The designs vary but all were constructed to
provide the shepherd with practical and durable accommodation.
The old huts had a stove in one corner for warmth and cooking, and a
window on each side so the shepherd could see the flock. A hinged stable
door, which was always positioned away from the prevailing wind, enabled
him to hear the flock, and strong axles with cast iron wheels were used to
withstand the constant movement from field to field.
The durability of these huts is evident today with many fine examples still
being used by farmers, mainly as storerooms, and can often be seen parked
up alongside fields. Many more have been consigned to agricultural
museums giving testament to days gone by. 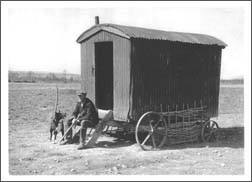 The pub ” The Shearer’s Arms  in Owslebury Bottom (sadly closed in 2004) has a long history back to the Doomsday Book and Henry VIII was thought to have hunted rom there. Its name speaks to the importance of Sheep and Shepherding on the downs over the past 800 years.