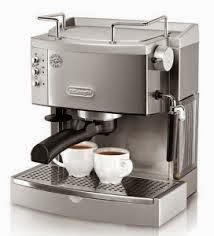 I am a coffee fanatic

I buy a section of green beans and roast them in an electric pop-corn popper weekly.
Over the past 19 years i have owned several expresso machines. the first a Starbucks Barista ( $500 ) by Saeco I believe lasted by far the longest 1997 to 2006 . When it died it was no longer serviced by Starbucks and in fact Starbucks no longer sold this type of machine.
It was replaced by the then new-comer in the market place Breville ( $350 ) this machine made excellent coffee bit the steam wand was not so good. When it blew its boiler after 18 mths just out warranty I switched to cheaper Krupps machine from Costco ( also about $300 ) this thing failed inside 3 mths and was replaced under warranty but i had to pay the freight to return it ($50) when it failed again a few moths later Krupps Canadian agents would not replace the unit so beware this and other brands handled by them.

Following a long hiatus I re-entered the market and found Focus appliances in Vancouver to be extremely helpful . When I phoned and spoke with one of their expresso consultants. He was confident that I would be happy with a machine that has been around a long time – solid reliable and serviced by them – De Longhi EC702

They offered the machine @ $199 with an extra 12mths warranty and free shipping = remarkable savings .

I received the machine this morning and thoroughly cleaned its inards with several hot water sparges and steam passes through it. Having watched a few YouTube demo vids of the machine I was not surprised to find the patented Auto steam wand produced steamed milk OK but with lots of bubbles and almost no micro-foam. One professional Barista who has this machine at home said to remove the outer sleeve from the wand  ( panarello ) permanently and learn to use the single jet tip as with the professional machines to make perfect micro-foam with a texture like latex paint .

Tomorrows coffee will be even better 🙂

Some suggestions based on my past experience in the craft and this machine in particular.
I firstly removed the tamper as I found it to rediculously awkward to use and made a hand one on my lathe with a Corian face that is a snug fit in the basket. This enables consistent tamping.

Next I removed the patented Panarello which produces froth rather than the required micro -foam and by trial and some error using only the single jet tip to heat the milk. By imersing just the short conical portion just below the surface of the milk near the edge of the jug one can generate a good swirling motion and nice micro-foam . I find that with the steam control handle down at 30mins position I get plenty of  aeration and moving the tip inward away from the edge near the end works well for me.

I found this instruction to be very helpful –
http://www.home-barista.com/espresso-guide-frothing-milk.html

The lug on the steam wand was causing me grief as it limited the movement and angle that I could position my milk steaming jug . Yesterday I cut it off and today even better Micro-foam with the tip placement about one fingers width in from the side of the jug and canted about 30 degrees with the tip bare submerged 🙂

Yep! it is twice daily use and still working faultlessly 🙂