Sat 26th Feb. – Quite recently I watched and enjoyed a PBS broadcast of ” The Unseen Alistaire Cooke” reconnecting with my old friend prompted me to revisit his works. When I was a young lad of about 17 living in Belvedere on the outskirts of London under the care of Aunt Mary. It was part of my Saturday evening  ritual  before going out on town. To listen at 6:30pm to the BBC radio broadcast  “Letter from America”.  I was gripped by his conversational tales from observed life in America transcribed through his eyes and voice. He has been repeatedly honoured for this lifelong work as an American correspondent, a love I believe . Many years ago Dian gifted me ” Alistaire Cooke’s America” which I cherish and have now added “Letter from America 1946-2004″ to my library as this encompasses the entire writing lifespan of the man.
This week I borowed from the public library a copy of another of his  books ” America Observed”  which is compiled from his regular column in the Manchester Guardian from 1946 to c1985.
Alistaire, a literary master of the story, chose his topics from the meat and fabric of every day life in American that he saw around him, usually in New York.  For the most part he shunned the big questions which commanded the tabloid headlines. He preffered instead, to find remarkable people from all walks of life doing ordinary or extraordinary things and show us their contribution to the betterment of the world.
If you care to indulge in a little nostalgia you can listen to the BBC achive of his broadcast “Letters”

Blogging was not around during Alistaire’s time but I am sure he would have enjoyed it !.

Wed 23rd Feb – It was just beginning to snow when I lurched toward the bathroom soon after dawn this morning at about 8 O’clock . It is now past supper time and it has now almost ceased. We now have 25cm = 10″ on the patio table. It is very rare that we get any snow in the New Year let alone a dump like this and there is more in the forecast for the weekend. <I:(O) 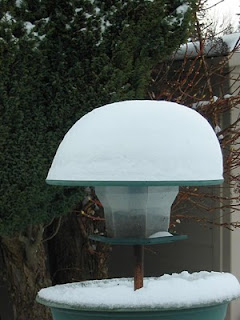 It was a better day inside than out. The router fence was completed and did not disappoint me with its performance as I moved on the finish those 32 lock joints for the chest drawers. I even managed to glue up the 3″ deep drawers as the supplies including the magical glue resist “Waxilit” from Lee Valley were in the mail box this morning.

Progress to on another front.  Dian visited Nanaimo on Tuesday and picked  up a pair of 1/2″ &  5/16″ shoulder bolts which I cut the heads off to make a precision mandrel for mounting the Richard Joiner, Backer Plate adapter for the Pendant making projects. I am thinking now that I can work a few more prototypes on the lathe while the glue-up of the drawers and carcase of the Tool Chest proceeds over the coming days.

On Sunday I took another 3 hr. session with my power carving tutor Jim in Cowichan Bay.
This one focused on refining the bird into more anatomically correct form. Jim is trying to turn novices into proficient avian carvers by getting us to see and translate the information on the drawings accurately to the piece. Next week we will be refining the head and adding wing detail.

Meanwhile I worked in the shop. Not being content with the crappy plastic fence which came as part of my router table I decided that to do a more precise job of making the drawers for the tool chest I would begin be making a proper router fenc. It needed to be longer, straighter and completely rigid with an ease of accurate adjustment and much taller to better handle tall work pieces such as drawer components.

Sat 19th Feb – The carcase for the Machinist Chest in ready for glue-up but waiting for a can of “Waxilit” to arrive from Lee Valley. Waxilit is a glue resist with a water base which is applied all surfaces adjacent the joints where glue will squeeze out. It prevents the excess glue penetrating the wood in unwanted areas ie outside joint lines. It prevents the unsightly stain resistance of glue traces and makes clean up a matter simply picking of the loose glue and removing the wax with a quick scrub of mineral spirits or methylhydrate. Yesterday I set up the Richard Joiner Backer plate adapter on the lathe i made my fist couple of attempts at making pendants one from Cottonwood Bark and the other from Black Walnut. Both were quite satisfactory so I went to a local supplier “Counter Measures” and scrounged up some scrap Corian pieces to try. Next I move to make a prototype of the drawers for the tool chest . Instead of following the drawings I decided on trying Lee Valleys Small Lock Joint method using their special router bit . This worked fine but material thickness of the sides and back is a bit skinny for this to work best. ?? So I will try another following the tongue and groove method as drawn.

16th Feb – I had a good day in the shop and completed a dry fit-up of the tool chest and gave it a sanding on all surfaces to 180 grit so the carcase now ready for glue-up. However, Waxilit is recommended to be applied to the exposed surfaces along the many joint lines to inhibit the glue from penetrating the wood outside the joints which causes those ugly stain & finish resistant marks on cabinetry so i have elected to wait until i can get this material. But!, it needs to be frost protected hence Lee Valley will not ship it in the winter months so I may have to wait a while until I or a.n.other goes to Victoria. 🙁

About the time I met Dian, we went to a Port and Stilton party on Boxing Day 1978. It lasted all night and I have never seen so much good Port and number of whole Stilton wheels. Since that event I have enjoyed the occasional flirtation with a Port & Stilton. Move on now32 years, we spent last Christmas in UK and my daughters, Theresa & Juliet clubbed together for a Christmas gift, a M&S presentation box of Port & Stilton. This week, on Valentines Day, after a delicious meal of Braised Lamb Shanks I decided it was an appropriate time to open the gift 🙂
It was absolutely spectacular and Dian and I took a glass each, with Carr’s water biscuits and mandarins and the potted Stilton to watch a couple of episodes of Downton Abbey a lovely evening Thank you again T&J 🙂

It is all ‘appenin’ at once!. The SKF bearings for the Shopsmith Headstock ordered a couple of weeks ago arrived today and were duly installed :). The lathe faceplate adapter for the jewelry project also arrived 🙂 Hence I have several projects to choose between working on next.

Late last year I watched a DVD entitled “Beginning Wood Carving ” its the author, Everet Ellenwood recommends making a list of things you would like to have in pursuit of your hobby. Instead of friends and family buying you gift of socks and hankies, which you don’t really need they can look down your list and select an item to purchase. I did this primarily formy wife Dian and lo and behold for my birthday she chose a carving course for me making a museum quality California Quail. These are delightful birds that frequent our garden in flock of a dozen or so.

Yesterday was the start of the course at Jim Roberts home in Cowichan Bay about a 1:15 min drive south. Jim furnished us with a full scale drawing a basswood cuts for body and head and set of cast pewter feet and top knot and a pair of glass eyes.We spent a couple of hours learning about the habit and anatomy of these birds from Jim while laying out centre lines, wide body lines and other details required before removing wood.

Fri 11th Feb – A month to go to my knee replacement and the plans for the pergola arrive. So I’ll sit and study them to figure out the cedar lumber that I will  need to ask John to supply.
The Tool Chest carcase progressed with running the  four jointed panels through thickness planer then rough sanded and cut to final dimensions.

The hold up has been that the table saw had been blown over and was misaligned.
I have a 10′ x10′ roll out awning on the front of the shop so that I can work outdoors even when raining. This makes the most use of my small shop. However, last Monday we endured a violent wind storm and it was strong enough to upend the table saw left standing outside. It had taken quite a bash so I took time to dismantle the saw down to the motor unit and check the alignment of every component. Today when squaring the end of the carcase boards I found that the sliding table to be off parallel with the blade :(O . So I removed sliding table and re-set first the rails then set true 90º for the cross fence.
I was able to proceed  and route the 3/16′ x 3/16″ mortice’s on the inside faces.

One of the joys I discovered upon retiring was that there was no longer any real need to rush things. Throughout my working life all projects and maintenance had to be compressed into the available time an evening or weekend. Which generally meant that for example that if a tool became dull or damaged it was necessary to press on , to continue, as best could often frustrated. However, now as today, I just stop and rectify the situation right now ! This came to mind when it became apparent that machining the bevels on the raised panels would be better effected if a feather board were used to press the work against the sliding fence. However, the feather boards were not long enough to reach the work so I stopped! Figured out a way to make useful extention on which to mount the featherboard 3/4 hr later, hey presto! I have a useful jig and near perfect 7 1/2 degree beveled edge cuts on the panels. The joy of Doing it right far out ways the fact that a project may take  considerably longer to complete. 🙂